To Vote or Not to Vote

Three days before the Elections in the Philippines and most Filipinos are still confused of who they think they should vote for. We all know what the country is currently experiencing. We all know what is the right thing to do, but many of us are still misled. The Philippines is a country that is coming into life again: “again” from previous downfalls and defeats. One way to make the country better is to choose the right leaders to vote for. The problem is, many Filipinos are confused with voting the right candidate with the ones that they want.

It is simple as differentiating “NEED” versus “WANT”. Filipinos vote more on the candidate that they want instead of voting for the 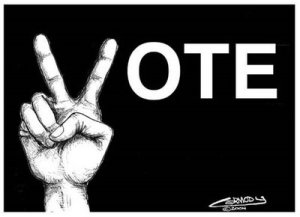 candidate that they need: the candidate that the country needs right now. And why do the WANTS always prevail? Maybe because we are not informed enough. Instead of stupid political ads which roams around our television, all playing novelty songs or doing some “pakuno” stuffs, why not just inform the Filipino people? Instead of wasting millions on jingles and flyers, why not make an effort on making the people know you because of the good actions you do to for the betterment of the country?

I hate to say this, but Politics in the Philippines has been a popularity show these days, and the voting seems to me is like a “vote for the most popular candidate” system already. How many times did we hear the “It’s time for CHANGE”, the oh-so-not-dying word which has become futile already because it has been used over and over yet there are no changes at all.

Fellow Filipinos, please know the difference between who do you want to vote and who you should vote for. Don’t depend on fame, on the background, or the dynasty that the candidate belongs to. Because what is important is not the name but the good things that the candidate will put into action once he is declared winner.

This time, let there be no excuses for mediocrity and stupidity. Make your vote count and make the change possible.